This month we are giving special prominence to a 13 year old pool prodigy by the name of Adrain Prasad. We sat down with Adrian and asked him a few questions in regards to his passion for billiards, fundamentals, and future goals within the industry. West State has recently sponsored Adrian in hopes to help promote and support Adrian’s progress, along with his love for the sport. 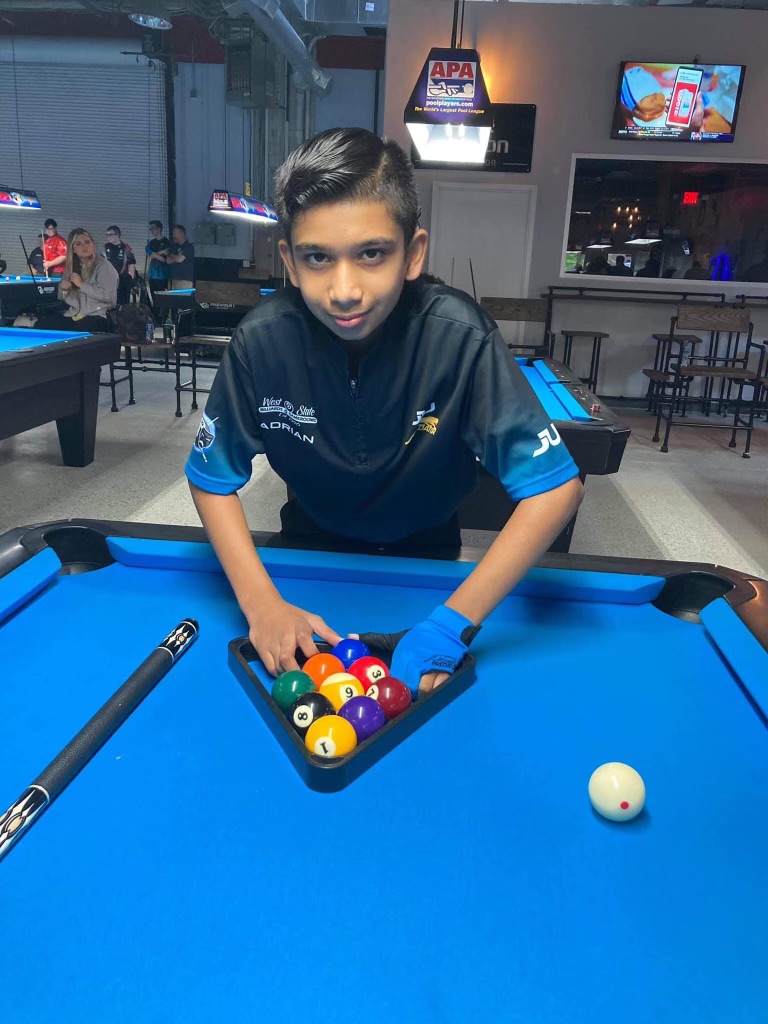 Adrian initially started playing pool at the young age of five years old, and originally developed his interest in the game when he won a match against his dad. Adrian mentioned they had played all day, and that he had continuously won every single game. His father put in some more practice, and eventually began defeating Adrian in future games. This is when Adrian felt more compelled to get better, and better. With time, his passion for billiards grew more. As of currently, he practices for up to five to six hours a day, and on average about three to four hours on a school night. He had recognized his talent when using his very first pool table, a Brunswick Gold Crown. As of this past month, his family has purchased a Diamond table at our West State store located in Fullerton, California. Adrian now owns a table which is universally used in all tournaments, decorated with a blue label and diamond light. He states that he is very grateful to have the opportunity to practice on a competitive table in the comfort of his own home, as to waiting for warm ups on the day of the tournament.

As Adrian grew older, and technique grew stronger he eventually entered tournaments to play competitively. He started in local tournaments, which led to later competing in the Junior National Championships winning up to three games back to back. His first tournament was at the age of seven, located in South Sacramento. Adrian had lost his very first match, but it had only encouraged him to push harder. The second time he came back to win against that same contender, he has continued to defeat that player in tournaments to this day. He possessed a drive for triumph, receiving another opportunity the same week winning up to three matches, achieving second and third place overall. He has mentioned that winning those tournaments had ultimately intensified his excitement, wanting to play even more everyday. Adrian listed a few professional pool players that he looks up to, mentioning names such as Shane Van Boening and Oscar Dominguez. Stating that he looks up to Shane because he has the most controlled and powerful break. He mentioned that he has not yet received the opportunity to meet Van Boening, but enjoys watching him through YouTube. Oscar so happens to be his coach, Adrian says he is very thankful for all that Dominguez has taught him and for being the best teacher. He mentioned that since working with Oscar, he has won every match playing amongst thirteen and younger tournaments. He practices at Hard Time Billiards in Sacramento, and is proud to share that he is also sponsored by Predator Cues. Adrian plans to further develop the sport, continue having fun, and making new friends along the way. He hopes to one day coach others, and wants to become a professional pool player. He is currently working towards his goal to be the youngest player in the Mosconi Cup, which would be eighteen years old. He hopes to improve his fargo rate up to seven hundred-twenty, which is considered pro, his current rate is listed at five hundred-forty and has played about two hundred games within his lifetime.

Adrian encourages individuals of all ages to take the time to learn the game. Stating that it is a safe, and enjoyable way to entertain family and friends. He quotes, “practice makes perfect, and it is important to have fun”. His little sister is also interested in the sport, mentioning she has also won a pool match at the age of eleven. He hopes that pool can become a family sport by which his entire family can join and have a great time engaging in the game. Playing pool is not the easiest, and it takes every bit of precision and strategy. Practice is key. Adrian makes sure to focus on specific elements that he knows will help him throughout a match. Making time to incorporate building drills, position drills, ball pocketing drills, focusing on controlled breaks, ensuring safety, and concentrating on fundamentals. Adrian does not only practice to compete, he also enjoys playing with friends and has listed a couple of different billiard games he favors. One being his all-time favorite called nine-ball, more specifically because it is fast paced and acquires more positions. He enjoys having to focus on all the different aspects of the game, mentioning that one wrong move can cause the whole run to be over. He likes that there is more safety play, and noting there is more luck in not having to call every pocket. He also enjoys ten-ball, which is very similar to nine-ball, but in this game there is less luck due to having to call every pocket. He enjoys playing this game with his Junior National Championship friends over zoom calls.

Adrian would like to give a special shout out to his family for being supportive of his passion, purchasing plane tickets, taking care of travel expenses, providing him with a brand new tournament table, and an amazing game room to practice his love for billiards everyday. Specifically giving appreciation to his mother Sarita, his father Atish, and his younger sister Ashley. He would also like to give thanks to his coach Oscar Dominguez, and his wife Desirah for sponsoring him in their pool hall and for great teachings.